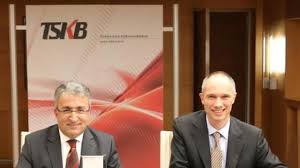 Fitch Ratings has assigned Turkiye Sinai Kalkinma Bankasi A.S.’s (TSKB) USD750m medium term note programme Long- and Short-term ratings of ‘BBB-‘ and ‘F3′ respectively. The ratings apply only to issuance of senior unsecured notes. The ratings are senior programme ratings and do not imply that the ratings will be assigned to all notes issued under the programme. Senior notes under the MTN programme will represent direct, unconditional, unsecured, and unsubordinated obligations of the bank. However, Fitch reserves the right to not rate certain instruments issued under the programme. The programme is to be listed on the Irish Stock Exchange. Notes issued may be in any currency or of any tenor. KEY RATING DRIVERS The programme’s ratings reflect the ratings that are expected to be assigned to senior notes issued under the programme, and are in line with TSKB’s Long- and Short-term Issuer Default Ratings (IDR) of ‘BBB-‘ and ‘F3′ respectively. The bank’s IDRs in turn reflect the policy role of TSKB and are based on a high probability of support, if required, from the Turkish government. TSKB is 50%-owned by Turkiye Is Bankasi A.S. (BBB-/Stable) and performs a public mission, as defined in its statutes, of attracting foreign capital investments to Turkey and participating in the development of the country’s capital markets. RATING SENSITIVITIES As the MTN programme is rated in line with TSKB’s foreign currency IDRs, the rating is primarily sensitive to changes to the IDRs. TSKB’s IDRs are sensitive to a change in Turkey’s sovereign ratings and also to a material reduction in the level of state-guaranteed debt or an erosion of its policy role, either of which Fitch would consider as a reduction in the state’s commitment to TSKB, and therefore potentially an indication of a reduced propensity to provide support, in case of need.